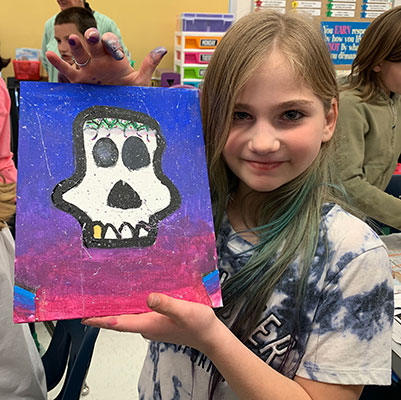 A partnership with a local tattoo artist is bringing ancient, complex societies and traditions to life for DES 5th graders, who recently learned how to paint vibrant, colorful, sugar skull images during a gray, winter day.

“In my 22 years of teaching, this has to be one of the best partnerships that I have brought into my classroom to share someone else’s talent with our students,” said teacher Chris Danapilis, who, on Dec. 6, once again hosted tattoo artist Chad Foster in his classroom for the entire 5th grade.

Foster, owner of I & I Tattooing in Schenectady, brought to life for the students Dia de los Muertos (the Day of the Dead), an ancient Aztec celebration of the lives of those who are deceased. He taught them about Aztec sugar skulls and how to paint their images.

Foster enjoys his yearly visit to Duanesburg Elementary, where he is inspired by students who are “well behaved, eager to learn and encouraging of each other.” 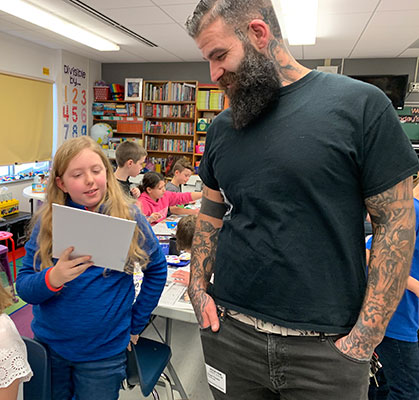 During the celebration of Dia de los Muertos, sugar skulls are often used to decorate the ofrendas (offerings), and they are exactly what their name describes, skull-shaped sugar, Danapilis said.

Traditional sugar skulls are made from a granulated white sugar mixture that is pressed into special skull molds. The sugar mixture is allowed to dry, and then the sugar skull is decorated with icing, feathers, colored foil and more.

While the ingredients of sugar skulls are edible (with the exception of the non-edible decorations that may be added), the skulls are generally used for decorative purposes. However, some small sugar skulls are made with basic icing so they can be eaten.

“It is always a delight to watch our students interact with my friend, Mr. Foster, and bring to life their own creativity in their sugar skull paintings,” Danapilis said. 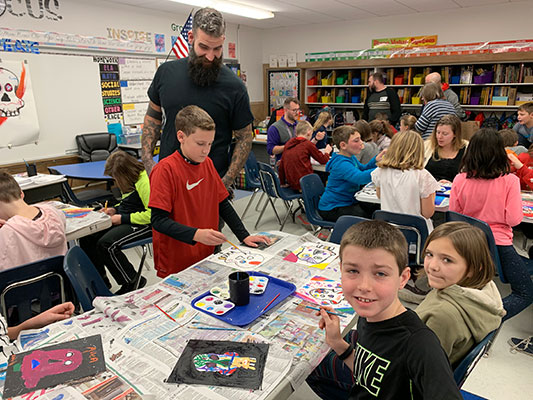 Danapilis noted that Spaniards who invaded Mexico tried to eliminate the seemingly offensive Dia de los Muertos holiday with no success. Dia de los Muertos was eventually merged with the Catholic All-Saints Day and All-Souls Day on Nov. 1 and 2 in an effort to make the holiday more Christian.

Fifth grade students at DCS learn about complex societies including the Aztec, Inca and Mayan civilizations and their impact upon American history. After completing the unit, the students are able to compare and contrast the characteristics of the civilizations, including government, religion, war and sacrifice, technology, writing and art, jobs, agriculture, transportation, cities and social ladders.