DCS’s cross country teams had another great day of competition on Oct. 13 at the Burnt Hills Invitational in Saratoga Spa State Park, and the boys team ruled the duals Oct. 16 in Schoharie .

Five team members ran personal best times at Saratoga State Park, and Elaine Atanasova set the school record for the course with a time of 18:23. 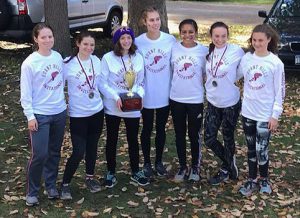 The boys modified cross country team placed fourth in the B race, where 29 schools were represented.

On Oct. 16 at Schoharie High School, competing without two of their top three runners, the boys varsity team won two of three meets in earning a share of the WAC dual meet title. Duanesburg, Fonda-Fultonville and Fort Plain-Canajoharie all finished the dual meet schedule with 8-1 records.

The cross country teams will honor their seniors on Monday, Oct. 22 in the high school cafeteria at 5 p.m. All are welcome to come and celebrate.