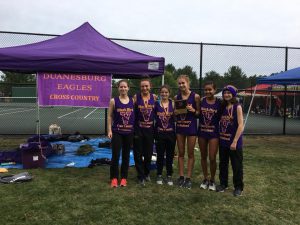 Duanesburg’s Eagles flew high at the Blackbird Invitational in Voorheesville on Sept. 8. The girls cross country team ran away with 1st place. They defeated 11 teams for the win, with Elaine Atanasova leading the team with a 1st place finish, 58 seconds ahead of the second place runner. Jen Skeeter placed 5th, Alice Cole placed 12th, Hanna Avery placed 14th and Alana Mitchell rounded out the scoring. In addition, Jessica Archambeault placed 5th out of 47 runners in the freshman race. As Coach Lynch noted, “It was a great start to the season.”

The boys cross country team rocked at the Invy, where they began their season. Coach DiMasi reported: “Andrew Drescher placed 4th in the varsity race, as the team, competing without two of its members, placed 9th of 17 teams. Sal Gallo finished 31st and George Atanasov 38th. All earned medals for their finishes. In the freshman race, Porter Wilsey came in 15th, while Chris Vogt was 22nd, and both earned medals. The boys will compete at Fort Plain Sept. 15.” 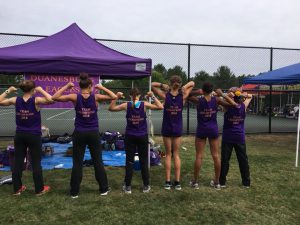